I finally got a chance to get back to some Pinterest-inspired projects.  Today I decided to tackle making decorative paper flowers.  The link on Pinterest made it look very simple.  Items needed – magazine pages in various colors, shredding scissors, bamboo skewers, tape, floral tape.  First challenge – no shredding scissors and couldn’t find them anywhere in Nuremberg (not exactly a crafty place I’ve learned).  So I improvised and used a short pair of scissors and made the many cuts by hand.  I also did not have bamboo skewers and could not find them in the market, so I used paper straws instead.  The process of rolling the cut paper around the straws proved to be challenging.  I had many failures and I’ve posted a few below.  Once I finally got the hang of it, I think they turned out pretty nice.  Now I have a decorative piece for the bedroom and one for the living area.  These would make a lovely centerpiece for a bridal or baby shower – or simply a nice way to add a little color in your life!

Folding and cutting the paper 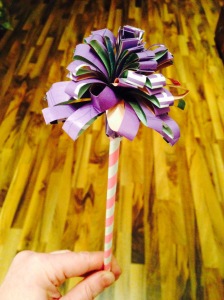 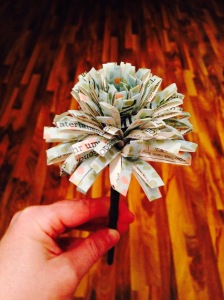 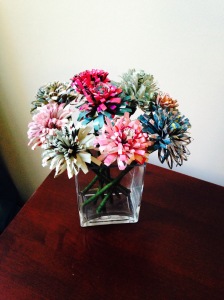 Flowers for the bedroom

Flowers for the living area

The Whimsy of Color

I recently rediscovered the sheer delight and whimsy of coloring.  Did you know there is an entire line of coloring books aimed at adults?  I have found it to be a calming activity that allows me to explore colors and de-stress from the troubles of life.  I highly recommend buying yourself a coloring book and taking a walk down memory lane….. 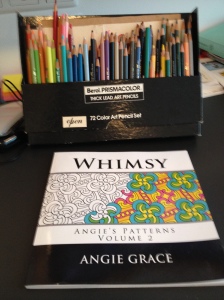 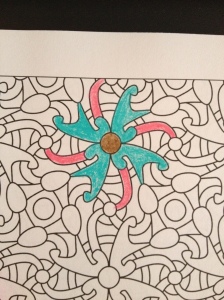 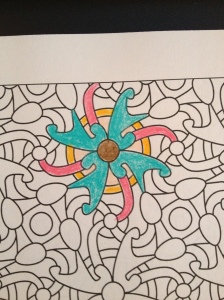 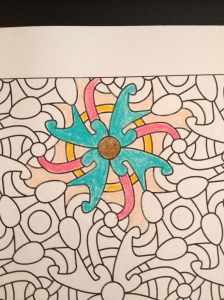 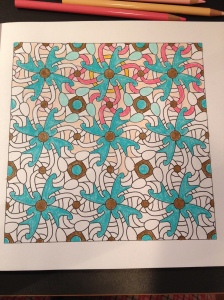 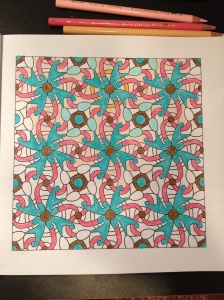 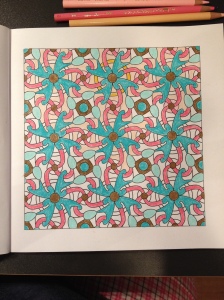 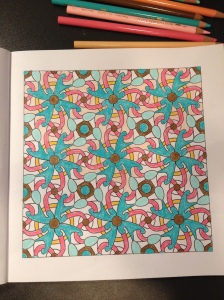 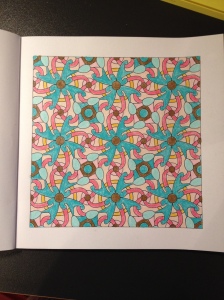 A friend of mine asked me if I would think about art projects that kids could do, but would look good enough that people would purchase them.  Pinterest has a zillion ideas, so I started there.  However, one night while trying to sleep, I had an idea about a frame that could potentially fit the bill and was cheap to make.  I scribbled my idea in my notebook next to my bed and left it for a rainy day.  Yesterday was that rainy day.  I had a frame on hand from Michaels that has a heart cutout for the photo.  It cost a whopping $1.

It started with a frame and an idea….

I searched through the decorator fabric samples I had on hand and decided on a pattern.  Then I accented it with felt and another solid, textured fabric and some variegated yarn.

I created 3 different sizes of hearts to use as a template and began cutting them out of the materials. 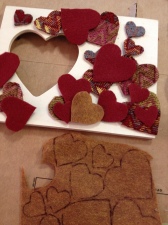 Tracing and cutting out the hearts

In order to avoid any wood show-through on the finished product, I painted the frame a dark blue.

After it was dry, I used Tacky Glue and began placing the hearts on the frame – placing them in all different directions and overlapping.

Starting to place the hearts

To accent the patterned hearts, I “traced” them in yarn.  This makes them pop against the other colors.

“Tracing” the hearts in yarn

I used the yarn to finish off the interior of the heart and outline the outer edge of the frame.  I think it looks a lot more expensive than its humble beginnings.